Organising design exhibitions is important not solely for enhancing the visibility of the field and of its protagonists, but also for advancing different views, for inciting reflections on design and, at best, through design. How this should be done, however, is open to question – rightly so.
In May 2015 I had the opportunity to attend the Festival de l’affiche et du graphisme in Chaumont, where the issue of how to exhibit graphic design is of specific concern. While the annual edition of the poster competition continues to feed the permanent collection of the International Centre for Graphic Design (CIG) in the city, the Centre’s new venue has finally been completed and will be opening in 2016, as a space for sustaining and promoting graphic design through shows and other initiatives.
This year’s Festival, along with hosting several shows, also featured a panel devoted to “Graphisme dans l’exposition”. Chaired by Étienne Hervy, artistic director of the Festival, it called three speakers to discuss and compare their views on the topic: the graphic designers Annelys de Vet and Giorgio Camuffo, and the design historian Emily King. All of them, in different capacities, had been involved with the organisation of the exhibits on display in the spaces of Les Subsistances. 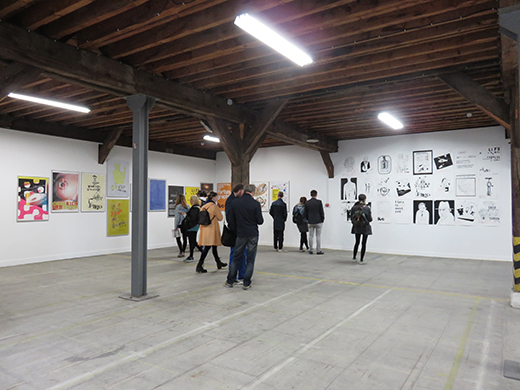 Camuffo was a member of the award jury and therefore had participated in the selection process of the more than 150 posters on display, in plain sequences, along the walls of the ground floor, and accompanied by no other information than the designer’s name, country of origin and the client’s name. Along with the other jurors, Camuffo had also been invited to exhibit his own work, a request to which he responded by presenting a selection of posters that in the 1990s he, as the director of Studio Camuffo in Venice, had commissioned to other international designers. Hung on a wall facing these posters was a series of drawings which Camuffo made after them and which included personal notes on his encounter with the posters’ authors. 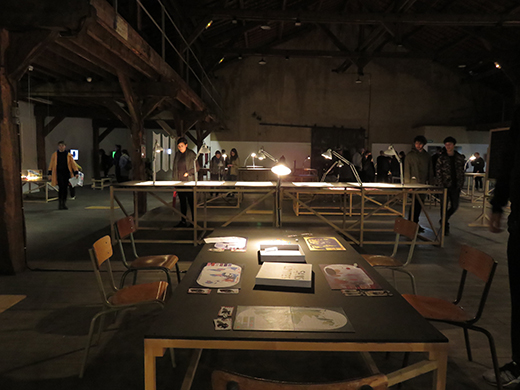 De Vet, head of the design department of the Sandberg Instituut Amsterdam, coordinated this year’s jury for the student competition and curated the show of the over 30 selected works. The theme for the competition, Unmapping the World, was taken from a previous exhibition project de Vet had organised at the Experimenta International Design Biennial (2013). Students were invited to create original projects that would rethink the ways we represent the world, and to embrace more inclusive and multimedia approaches to mapping in order to account for the “liquid times we live in”. The selected works – including posters and infographics in print or on fabrics, booklets, videos, web projects, and a series of carpets – were on show on the first floor of Les Subsistances, in a setting that was meant to suggest the school environment, with desks and chairs and with blackboards displaying captions and introductory texts. 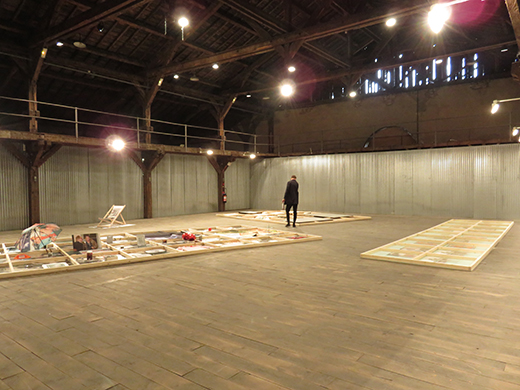 Finally, Emily King contributed a presentation text for the exhibition, Syndicat et Matthieu Laurette présentent MATTHIEU: Une rétrospective dérivée, 1993-2015. This retrospective was a rather peculiar exercise of remediation and production made by the graphic design team Syndicat of the work of artist Matthieu Laurette. Syndicat decided to transpose images documenting Laurette’s work – which is usually developed outside of traditional art contexts and formats – into every possibly imaginable form of merchandise item that could be purchased online, from toilet paper to iPhone covers. As one learnt from King’s short text, printed on A4 sheets, Syndicat uses “exhibitions as vehicles to explore the interaction of craft and economics behind the production and distribution of text and images”. The merchandise thus collected was then displayed within a wooden grid on the floor, which in turn was placed on top of a giant poster portraying Matthieu Laurette participating in an applauding TV audience. Close to the retrospective, and in similar grids, two other projects by Syndicat were also on display, including “Ricardo” – after the name of the economist David Ricardo – a poster that had been printed in different countries.

The panel began with the speakers invited to briefly introduce their personal experience with exhibiting graphic design. Besides illustrating the concept behind the student competition and show, de Vet recounted her engagement in recent years in organising exhibitions such as those related to her Disarming design from Palestine label of products, made in Palestine and aimed to incite reflection on the condition of life in that country. Focusing on this project, she compared the exhibit to a sort of “marketing tool”, in the sense that the show can become a tool to “feed the discourse”, as well as a space where cultural objects can help foster narrations.
As for Giorgio, he explained that the primary impetus for organising an exhibition – ever since the organisation of Pacific Wave in Venice in 1987, which introduced Californian graphic design to an Italian audience, and up through to his most recent co-curation of an historical exhibition devoted to Italian graphic design (La Grafica Italiana, 6th edition of the Triennale Design Museum, 2013) – has always been his own curiosity and interest in others’ work and in discovering new things and sharing them with a wider audience.
Finally, King explained that curating came to her as an extension of her practice in the field of design history. Comparing writing and exhibition making as both forms of argument building, she expressed the pleasure she takes from the latter, from the greater freedom and possibility to collaborate with other people that it offers. Interested in reviving or providing a new understanding of the cultural meanings of objects by connecting and juxtaposing them in novel ways – she mentioned the exhibition of the work of Richard Hollis that she curated – she also declared her perplexity towards the production of design just for the sake of exhibitions. 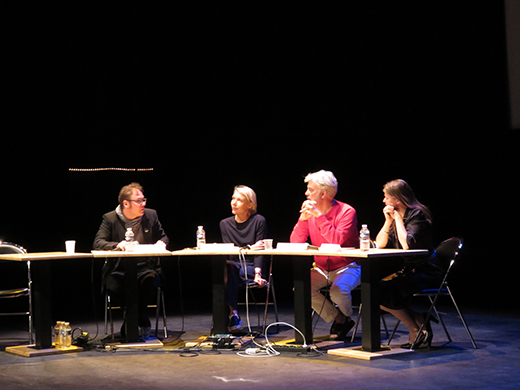 Ultimately, the speakers and chair generally all agreed that exhibitions are means to generate new insights, understanding and knowledge.
However, their positions progressively departed from one another, especially when the discussion was brought to focus on the specific case of the exhibit of selected posters for the competition. At this point all sorts of issues were called into question and members of the audience also made their voices heard. I try to recap, in my own words but drawing from the notes I took, some of the questions that were raised: Does displaying design out of context reduce understanding or does it offer new opportunities for discovery? Is it enough to show graphics as autonomous aesthetic artifacts? How does one avoid the effect of pinned butterflies, i.e. how does one avoid reducing graphics to mere decoration or images? Shouldn’t design be presented as a cultural object, about which multiple layers of meaning are to be conveyed? Won’t audiences have difficulty in understanding, for example, posters in a foreign language – such as those in Russian selected by the jury – or how they were produced, unless you provide this information along with them? But does one realise how difficult it is to collect and provide contextual notes on contemporary graphics, given that designers themselves do not intend to provide information? After all, is there really an audience interested in exhibitions of graphic design? Non-specialists, are they not bored by graphics? Or is it instead graphic designers who tend to believe so, while, instead, non-specialists are actually very interested in graphics and would like to learn more? And yet, when you provide information on the content of certain graphics, for example, would you still call it a “graphic design” exhibition? On the other hand, isn’t it contradictory to try and explain graphic design, when it should communicate by and for itself? On the other hand, why exorcise the aesthetic and the visual impact of graphic design provided, with regards to the specific case of the exhibition of posters submitted for the competition, that these aspects were in fact the main criteria for selection, so that one could say that the actual show is an honest rendering of the very selection process? But then shouldn’t this, or any other, intention behind the installation be explicitly stated? And so on.
The panel seesawed for a while between too general and too specific, even too practical, issues. It was like watching a discussion between a group of curators who would probably never succeed in organising a show. The fact is that the views expressed, the approaches put forward, and the questions and opinions raised were all valid and legitimate. However, no definitive answer could be reached unless the panelists first agreed on what they intended or wished to do. As de Vet remarked, at some point, one needs to first ask her/himself what the goal of an exhibition is, what the purpose is, and whom one wants to engage. A simple and good point, indeed, which is further complemented by another point advanced, quite firmly, by King: that exhibition making is actually difficult, and it should be so, in the sense that it is a practice that requires commitment and dedication, time, resources, as well as experience.
So while the common refrain that design is difficult to exhibit may still be heard, one should not forget that, ultimately, to organise a design exhibition is to organise an exhibition, which means asking such basic and difficult questions as why, what, who, and how?